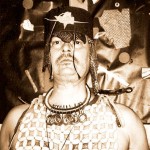 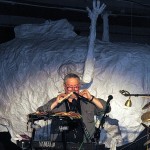 I am very proud to present an other guest at viewpoint-east.org. Today you can read an essay by Jury Jaremchuk, composer and instrumentalist from Lviv, Ukraine. He plays tenor-sax, soprano-sax, clarinet, percussion, piano. He works in different genres (free jazz, contemporary music, improvised music), contemporary technique of sax play (multiphone, slap, double staccato).

What is improvised music? It is
Music without different aesthetic idioms,
Music which is sent to different currents and styles,
Music is created here and now, directly on eyes at the audience,
The conditions is that it is music of the organized accidents, as a controllable stream
Creative consciousness, certainly, with very high, musical
Preparation of executors of this music which demands a high level
Imaginations, intuitions, concentration and musical culture, which borders to
Religious rituals, creating a strong power field,
Where experience one or two, are empathized by the whole groups of people.
In this music there is no totalitarianism, it is born directly from
Group inspirations participants of ensemble, and feedback of a sound and idea,
This music a sound koan, or group meditation.
All of us know, that music is a sound, and the sound is the carrier enough
The big information, supervising a sound we structure it in
Composition directly at the moment of game, structure which
We make here and now are intelectual, a product of our mind with mentality and intuition,
As the mirror displays our external and inwardness, that is all
Processes that is demonstration all our essence at present.
Truthfulness of this process, proves to be true unpredictability and
Spontaneity played, is actually important for such music.
As the predominating factor this music is freedom, in
The moment of game, we are released from social stratifications and dogmas,
Coming nearer directly to the primary essence.
And still, music and culture as a whole, are the major factors, allowing to overcome intolerableness of social life.