When I was in Kyiv in January and February I meet several that said they had identified one very important lack in the Ukrainian domestic debate and that is the lack of left wing intellectuals. I must say I agreed fully since we do need a criticisms of liberal values, capitalism as a guarantee of democracy, the concepts like democracy etc. I can’t value wheather it is the recipe on a “good debate climate” but at least I can see the world (Western, Eastern, Northern, Southern, in actually all directions) has been living in a sort of liberal “dictatorship” for far too long. It is possible that I have a very simplistic understanding of what Ukraine needs, but at least I can see that the country need something to make the debate more vivid and productive. Furthermore, when I was in Moscow a couple of months later I heard the same point of view, what Russia need is left wing intellectuals that stands in contrast towards Kremlin and the political establishment.

But it was not until the other week, when somebody wrote on my chat that Ukraine need left wing intellectuals like you have in Europe I started to feel that something was nagging me, because I answered Yeah, yeah. But this is Scandinavia, and tried to forget about it. But I couldn’t since I stumbled over my irritation over and over again. It was not until this morning, when I read a review of Burnt by the sun 2 by Nikita Mikhalkov in the independent, but rather left wing, weekly newspaper Fria Tidning that I understood how I was irritated. The newspaper is not said to be left wing, but most of the articles printed there have a rather left wing approach towards different issues. I think that is a good thing, even though the political consensus in it really can make me feel sick some times.

Back to the review. I must begin with giving the author, Per Leander, credits for making the effort to write a review that is not pointing in the same direction as all other previous reviews of the movie. Mikhalkov has gone from being the Western Europe’s favourite director (by Burnt by the sun in 1994), to become one of the least popular such during the last couple of years. Most critics uses the same kind of words about his latest work, such as a patriot and nationalistic director with simplistic rhetoric that uses the Kremlin to authorize his expensive and vulgar movies. The two first remarks is perhaps indisputable, which is perhaps the reason why it is not mentioned in the review. However, to criticize a Russian director, that was formally exalted hero, can provoke Swedish left wing because he is, yes, Russian and from the Former Soviet Union. The review in Fria Tidning is a very good example on just that.

There has been a debate in Sweden during the last year if we can regard the crimes of Stalin as brutal as those of Hitler. Many on the left wing has said that we can not, all of those on the right wing have said “yes we can”. And of course you can see the traces from this debate in the review about “Burnt by the sun 2” when the author writes that “[…]in the sequel [from ‘Brunt be the sun’], he [Mikhalkov] wants to give the image of the Nazi terror that hit Russia, after all, much worse [than the Stalins terror did]” (my translation). My first remark is actually that he writes “Russia” not “the People of Soviet Union” or something more appropriate. Secondly, we have not yet been able to identify the full scale of the Stalinist terror. We do not even know the figures of those dead. I also suspect it depends a bit on where you stand, if you think the second world war was worse than the Stalinist terror or not. If you are from in example Ukraine you might say that this picture is not entirely true, and it is not easy to tell if some of the sacrifices the people in Ukraine did there during the WW2 was because of, or connected to, Stalin decisions. (The famine, called Holodomor, is like an open wound in Ukraine’s history). I dislike how easy he make it for himself by sweeping away the victims of Stalin’s terror with words that the WW2 was worse. It was horrifying, but it does not make the Stalinist terror less worse! This is the kind of left wing rhetoric’s you often see in Sweden. (Stalin was bad yes, but look at Hitler, he was worse and see what the Americans do in…. etc etc) 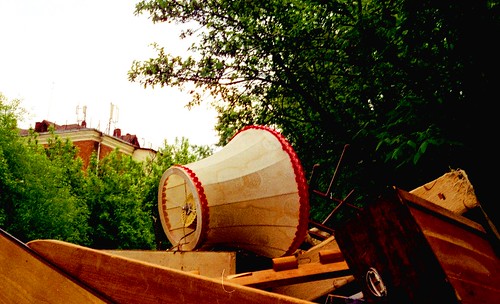 Old Soviet style furniture thrown away in Moscow, May 2010.
This things we should keep, though. It is old nomenclature we should get rid of

An other point is that the author criticizes the Western movie critics because they are not able to understand everything in Russian culture history and cannot understand the all paraphrases. It is interesting to see once again that a Swedish left wing movie critics actually uses the exact way of mechanism to exclusion such as Russian nationalists do. “You will never understand this because you are not Russian”. But in what sense does this make it a better movie? In my mind many references does not make a movie better, that’s all. It could actually be very contra-productive!

The last point is perhaps a stupid remark form my side, but I just can’t let it be. It is about Nikita Mikhalkov’s “great knowledge in music”. The author bases on the fact that he is the son of Sergey Mikhalkov that wrote the Soviet Anthem (Eh, I feel lost already). Mikhalkov JR reveals this great knowledge in music in using the titel of a very popular tune from the 1930s, a Polish tango. That is like saying that I have a lot of knowledge in the 1960s because I can sing “She loves me, yeah, yeah”!

This review is merely an example that i wanted to take to illustrate what I find problematic with the stand point that many Swedish left wing intellectuals have. My point is that a left wing intellectual movement or group is perhaps needed, but if it embraces Soviet Union and Stalinism (which is shown in the above mentioned review), just to be on contrast toward liberalism and capitalism, well, then you have a problem. I think it is rather fair to criticizes Mikhalkov and his movies. He is using his power in the Russian Cinematographers’ Union as much as possible, by giving himself money and excluding others. This is not mentioned even by one word in the review, which is very odd since there were a big crisis in April 2010 when many directors and filmmakers left the union in protest against Mikhalkov’s way of ruling the union!

In some odd way many leftist intellectuals in Sweden have found it important to defend old power structures in Russia and countries in the former Soviet Union. I understand it is a way of criticizing liberalism, but from my point of view it is the wrong way!

I would like to conclude by saying that I am pretty sure that Swedish left wing intellectuals will change and stop trying to defend old nomenclatura, when they meet the newly born such movements in Ukraine and Russia. And I do hope this moment will come as soon as possible.

Yesterday I wrote about Boris Mikhailov. During my most absent minded and distracted period in life, my mind have confused him with the director Nikita Mikhalkov. There is nothing resembling between them at all, (apart from the mustachio and the surname I guess). Notable is that I haven’t confused their work, of course, but their names. Which have lett me into a handfull confused dialogues. I won’t reproduce them here, you can possible imagine. Instead I will highlight the fact that Nikita Mikhalkov is making a new movie. 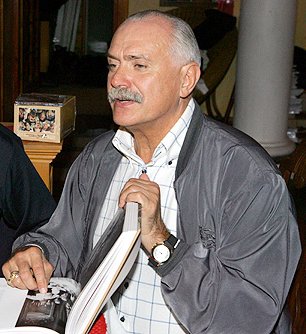 Perhaps this is no news for you, but I have to admit I was slightly surpised when I read it. During the past 10 years I have completely lost faith in his ability to make a movie that is not soaked in sticky nationalism and imperialism. And I actually belonged to those that enjoyed his “Burnt by the sun”.

When I now learned to know that he is working with a “Burnt by the sun 2” I can’t feel other than pure fear flavoured with a slice of scepticism’s. On the other hand, the movie possibly opens for an other dimension… like pure comedy? But I doubt the actual theme allow it. The Great Purge is nothing to joke about.