Some good things really do comes out of bad things. Well, I hope not to provoke too much, but after have been living in Ukraine for more than five months I have only one word to say about the country’s gender order, horrifying. And I also admit that is close to an understatement.

I could go though many examples on how politicians ignore equal rights for women, or every day life situation that not only I find absurd.

But I will not.

Instead I would like to present for you those that do react, and have in mind to make a change Феміністична Офензива, a feminist offensive towards a new world order. Below you find photos and a video from their demonstration on March 8. And I have now only one word to tell you, enjoy! I am so happy to have your power around!

A couple of months ago I asked a friend of mine, Ukrainian researcher and gender specialist, if she could say something about FEMEN. She answered, with a deep sigh that could be heard even though it was on a chat “FEMEN? Again?! I just sent you some information about them! All foreigners only wants to know about FEMEN”. I answered her with a laugh: “But this is the first time I am asking you about FEMEN.” Even though she found that hard to believe, she decided not to argue about it.

The incident is mostly interesting because it illustrates how exposed FEMEN are in media and how their reputation have got far beyond the borders of Ukraine. It also implying that all other feminist movement in Ukraine are now even farer from the limelight. I don’t want to belong to those that gives FEMEN too much space, but I think it is important to analyze them seriously. Especially since it is had to decide what to think about FEMEN. I must admit I still don’t know of I find their actions repulsive and contra-productive (etc. etc.) or provocative in a good sense. I have however found it hard to find good analytic essays on FEMEN’s work, but Maria Dmitrieva’s eminent article in частный корреспондент shed a lot of light over how you can interpret FEMEN. (If you don’t know any Russian you can use Google Translate.)

The article is a solid work, but there are two issues that Dmitrieva looks into that I would like to highlight a bit more closely. One important point is however FEMEN denotes that they are a feminist movement or not. Interestingly enough, you can get two answers on that question, since FEMEN seems to have decided (?) to have one approach toward the international audience and an other for the domestic audience. In Ukraine they claim to be without any feminist ambitions, but on their international site they claim that they really are working for feminist issues. I find it very intrigues that this seems to come as such a surprise to Dmitrieva. Feminism has (as Dmitrieva surely knows) very different connotations in the West and former communists countries. And what does Dmitrieva means with a “feministic movement”? For me this is not completely clear. For instance, can we actually (as Dmitrieva seems to imply) call women that went out on the streets to demand bread in Russian Empire in the 1917 as an “feminist movement”? I would rather call it “women acting in a certain cause” or that it is a movement with a majority of women. From my point of view it is not an easy task to compare Ukrainian (which is not the same as Russian!) and Western situation without regarding their rather (or even, very) different political situation which has promoted feminist actions very differently.

I would however like to question something different in FEMENs action. FEMEN often shows their support for other issues than feminist issues. This is OK, of course, but I am not sure that I agree with that showing your naked bestas when protesting against the “blue buckets” outside the Russian embassy, actually contribute with anything significant… expect showing your breast. 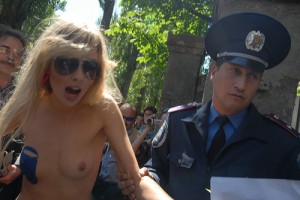 By mentioning this I would say that Dmitrieva’s essay about FEMEN is actually the best and most important analyze on FEMEN so far. I do wish that somebody would translate it so it could be published for an international audience as well. And above mentioned remarks is not actual critic, but rather me getting inspired by an important and thought-provoking essay.