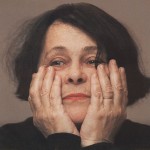 11 Responses to “A Missing Gaze”