viewpoint-east‘s second guest writer is Maria Nilsson. She is 30 years old with a master in political science and she lived in Ukraine on and off between 2005-2007.

I have decided for once in my life to leave the politics behind and focus on something more readable as some of you might agree on. Instead of focusing on something like “Rethinking cultural identity in a post communist context – the case of Ukraine” my text is nothing but a declaration of love to a country I never thought I would fall in love with. A country that, where I m from is not known for anything apart from a nuclear power plant disaster 20 years ago, a track and field athletic called Sergey Bukka, a constant political turmoil together with a few plane crashes that makes every Swede nervous even by the sheer mentioning of the words domestic flights. I must confess that it is a love affair with obstacles. Ukraine is not an easy country to love there are no endless beaches with soft sand and blue ocean view (the views in Ukraine are mostly those of old plants), there are no fantastic sights like the ones in New York, no delicious cuisine like in France and frankly speaking Kiev does not stand a chance compared to London, Venice or Rome. The buses are not only never on time, there is not an existing timetable, the ordinary conversation tone is what other people would describe as bordering to arguing, Ukrainians have a fables for the most strange looking leather jackets combined in a worst case scenario with leather hats, they believe your femininity lays in the length of your nails and heels and vodka is consumed on the same occasions as milk are consumed in Sweden. 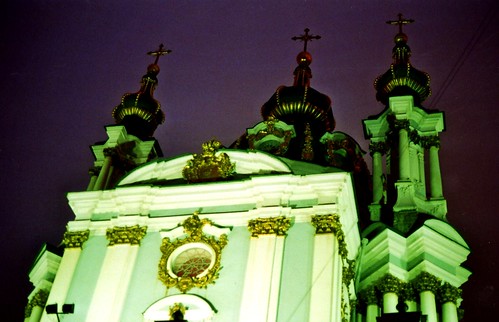 Still, there is not a day that goes by that I don’t miss Ukraine, if I were to live somewhere else than where I live now London, Paris or Rome does not stand a chance to certain Ukrainian cities like Kiev, Odessa or Kerch.

Ukraine has shown me that the great cultural heroines like Tjechov and Achmatova are never forgotten. As a country Ukraine has showed Europe that change is possible. Ukrainians have showed me what is like to live in a close community where people care for each other, where the next level on your career ladder is not the most important thing in life but friendship is. You have shown me that there are people willing to help other people even when they have nothing to offer but love and two strong arms.